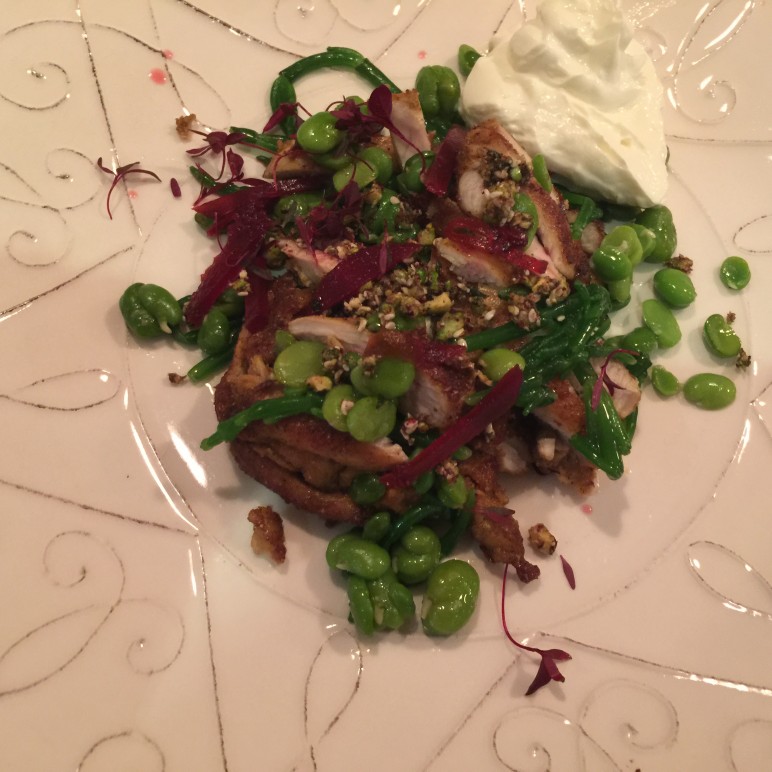 When the lovely Stephen Emms from Kentishtowner Magazine picked up my quest to find the perfect North London venue to host my first pop-up night; I had no idea it would lead me to such great places and people.

Quite a lot of restaurateurs and publicans contacted me with potential spaces but it was the Bull and Gate pub (www.bullandgatenw5.co.uk) in Kentish Town that stole my heart. Just two months post refurbishment, the dining room is lovely and airy with a great vibe and a prefect size space. I sat down with the head chef (who has very kindly agreed to let me monopolise his fab kitchen for the night) and I was confident that these were the guys I wanted to team up with.

Menu decided, I asked the General Manager for a 24 hour head start to let friends know about the night before it got marketed through the pub, and social media channels. I pointed some of my contacts to the link on Eventbrite and a matter of hours later; all 60 tickets were sold!

Filled with encouragement, I have now secured a further date on the 8th September. Link will be posted to Eventbrite soon so this is me giving you all a little heads up first. Feel free to let me know if you want a ticket….they won’t hang around for long….. 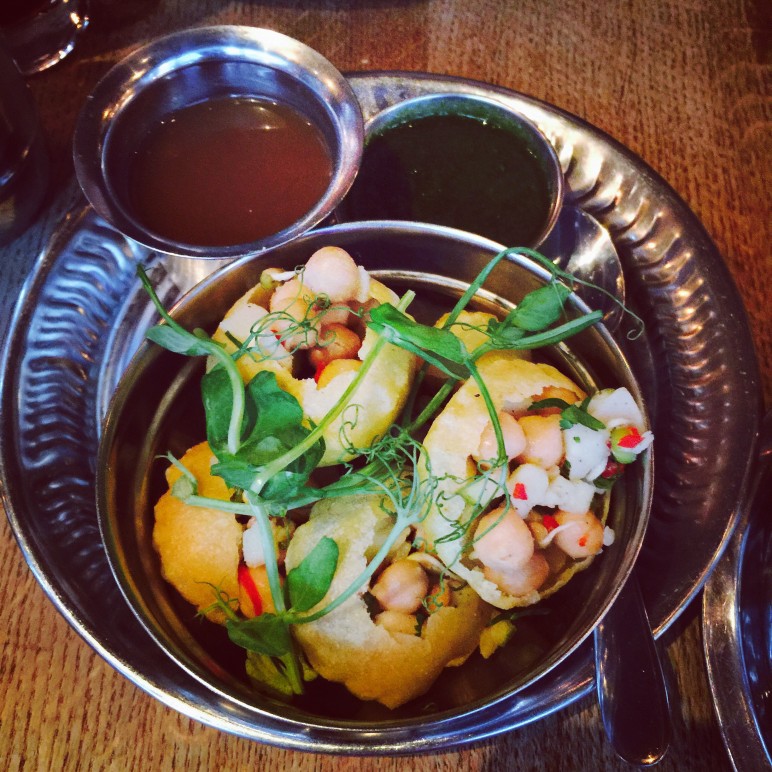 It’s been non-stop eating out for me for the past three weeks -all in the name of research though so that makes it okay.

I’ve gone Korean (multiple times), Indian, Middle Eastern and British. I felt the need to share a few reviews in the hope of spreading the word of some very good places. With so much choice out there, its always good to get recommendations from passionate foodies such as myself.

The first week of my eating out bonanza started with a trip back to home town of Brighton to see my mum. A bit rusty on the best places to dine, I sought the help of my close friend who recommended the Chilli Pickle in Jubilee Street, North Lanes. She had tried earlier that day to get us a table but they were fully booked. Not content with being told no, I drew the MasterChef card and tweeted them to ask for a table. I don’t do it often but when I’m determined to try somewhere good; I am drawn to desperate measures. So how pleased was I to be sat there enjoying some of the best Indian cuisine I have ever eaten? Very. Dishoom, watch out…if this place, expands to London, be afraid, be very afraid!

The menu was so exciting, it sent me into a bit if a tiz. I wanted everything but settled on some sharing plates. 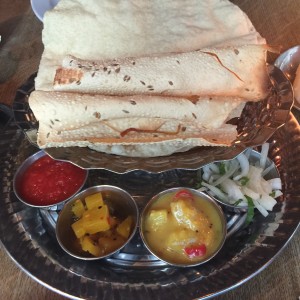 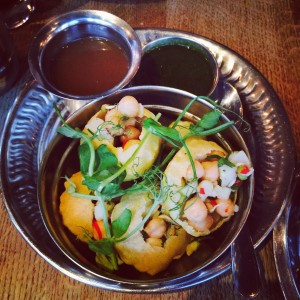 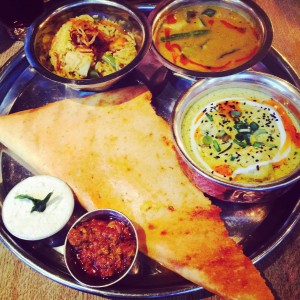 Poppadoms with a range of pickles and chutneys, Pani Puri and Masala Dosa with Biryani and lentils. The food was insanely good. Really fresh and flavoursome and exactly as I hoped it would be. I highly recommend this place if you are visiting Brighton. Book ahead and please order the Pani Puri whatever you do. Price point: £25 – 30 per head excluding alcohol for two courses  www.thechillipickle.com

Next up was a birthday treat from my mum in the form of dinner at the Gingerman. Part of a collection of restaurants from the same duo, this was the posh one. Down a narrow little street heading down towards the sea, you will find this little place tucked away. Its small but perfectly formed with a lovely menu and delightful staff. I’m not normally a fan of food served so daintily, I’m more about rustic plates and generous portions kind of gal but they won me over. For the first time in my life,  I ordered rabbit and it was so good, I now feel like I’ve missed out all these years. My starter was chicken three ways with puffed rice and a barbecue sauce. It was an intrigiung combination and every bit as good as it sounded on the menu. It was small, but that’s what you are signing up for. The average eater would have been happy; I’m just greedy!  However after the previous night’s banquet at the Chilli Pickle, I was grateful for the relief to my expanding waistline. 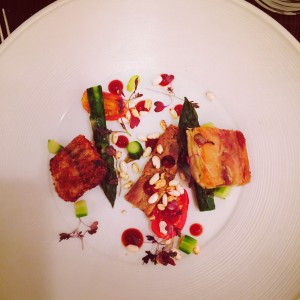 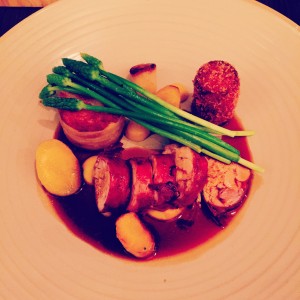 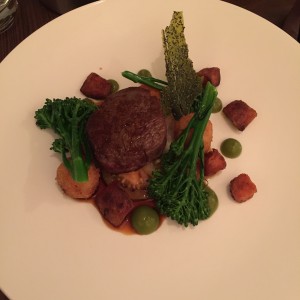 From left to right; My pressed chicken thigh, wing and leg with asparagus, puffed rice and barbecue sauce. My main was rabbit ballontine with ham hock and rabbit croquette, boulangere potatoes, heritage carrots and baby asparagus (yes I like asparagus). This was so good, lick the plate clean good and I was nicely satiated after this. The last pic was my mum’s beef fillet which was also nice, although I definitely think I chose better. I could learn a lot of their delicate presentation! A thumbs up if you want a nice quiet cosy place with for a spot of fine dining. Price point: £45 per head with wine for two courses. gingermanrestaurants.com

Next up we have Honey & Co, the choice for my actual birthday dinner and a place which I had heard a lot of good things about. In fact during the filming of MasterChef, my sister in law kept trying to get me to eat there as somewhere which would have offered a lot of inspiration and good ideas. I never made it but I got there in the end and I’m glad I did, if nothing else, I could at least join in the conversations around a very much talked about place. I had been warned that the decor was a little lack lustre – it was more of a cafe type vibe rather than a restaurant. This I could forgive if the food had blown me away but it was a like more than a love on this occasion. We had a meze to start which was the usual suspects; Falafel, hummus, taboule, labneh. All tasty as expected but nothing to write home about. 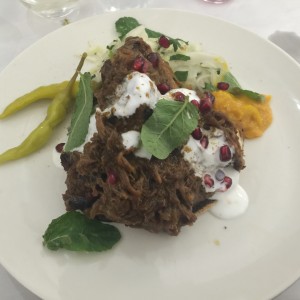 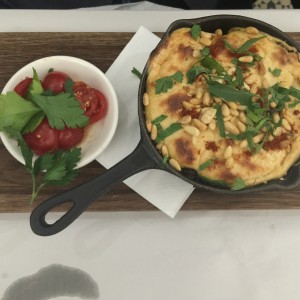 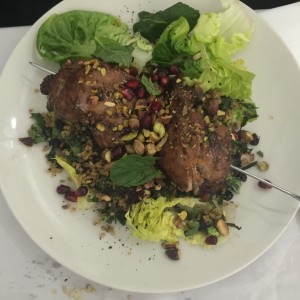 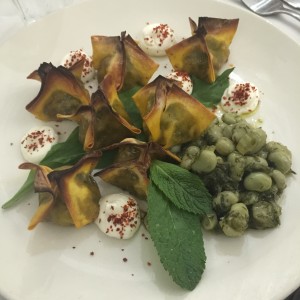 Now the mains, I definitely ordered the best thing on the menu – The Shawarma. Slow cooked lamb shoulder which was  melt in your mouth soft and so unbelievably tasty. The remaining three mains were made up of the Pomegranate Chicken (very nice) Manti with whipped feta and broad beans (so so) and Lamb Siniya which was baked with tahini and yoghurt (a bit rich and heavy.) It was definitely my sort of food, served in the way I love. Big portions and with a focus on flavour over presentation. I love what they are trying to do with bringing the style and vibe of a restaurant typically native to Tel Aviv; however I felt a little bit disappointed with the decor, or lack of. A few pictures on the wall would have brightened the place up a bit and perhaps the staff could have been  a bit more attentive. We waited a long time for our food which meant that the heavy nature of it lay on our stomachs well into the night having finished so late. To be fair, we did splurge on desert which was definitely the highlight. 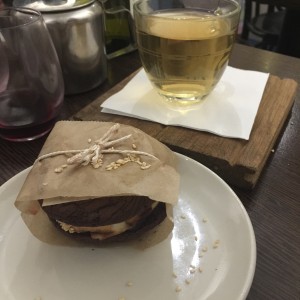 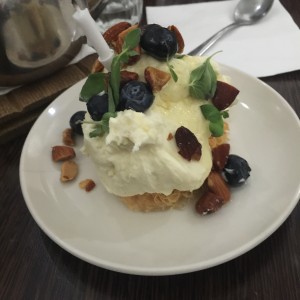 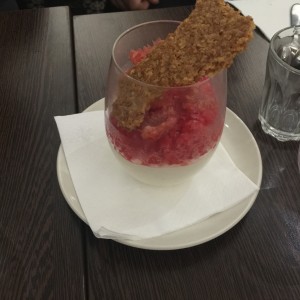 I got their signature cheesecake which is a must and I delved into the Tahini cookies with ice cream which was very good. A mug of mint tea later and I was fit to burst. The food is rich but you don’t need to be; with wine, it was very reasonable at a price point of £45 per head for three courses. honeyandco.co.uk

Next week’s reviews will include Koba, The Palamar and Goodman Steak House.